Back-to-College season is big, buzzing and bound to break the record

BTC consumers are spending $223 more on average than they were prior to the pandemic.

Washington – Back-to-College shopping is already underway and on course to set a new retail sales record for the second consecutive year.

Total back-to-college spending is expected to reach nearly $74 billion, up from last year’s record of $71 billion and the highest in the history the annual survey conducted by the National Retail Federation (NRF) and Prosper Insights & Analytics.

Inflation plays a role, according to the survey, but doesn’t account for the full increase. Since 2019, total expected spending on back-to-college has grown by $19 billion and consumers are spending $223 more on average than they were prior to the pandemic. Nearly half of this increase comes from spending on electronics and dorm or apartment furnishings. The spend on furnishings is projected to hit $10 billion this year. 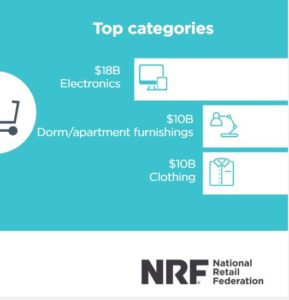 More college students and their families plan to shop this year compared to last and anticipate spending an average of $1,199 on college or university items, on par with last year’s record of $1,200.

As has been the case with other major shopping seasons, consumers have started early. As of early July, 56% had already begun shopping for school and college supplies. Still, 85% said they have at least half of their shopping to do. 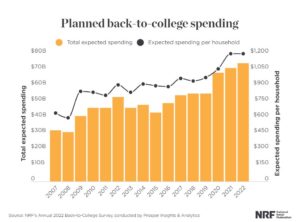 “We are seeing real shifts in the way people are shopping and spending on back-to-class items since before the pandemic. As a result, retailers are also shifting by bringing in inventory earlier and extending back-to-class offerings,” said Prosper Insights EVP of strategy Phil Rist.

Consumers hoping to snap up deals from inventory surpluses

NRF says a recession is unlikely in 2022, but 2023 could be a different story