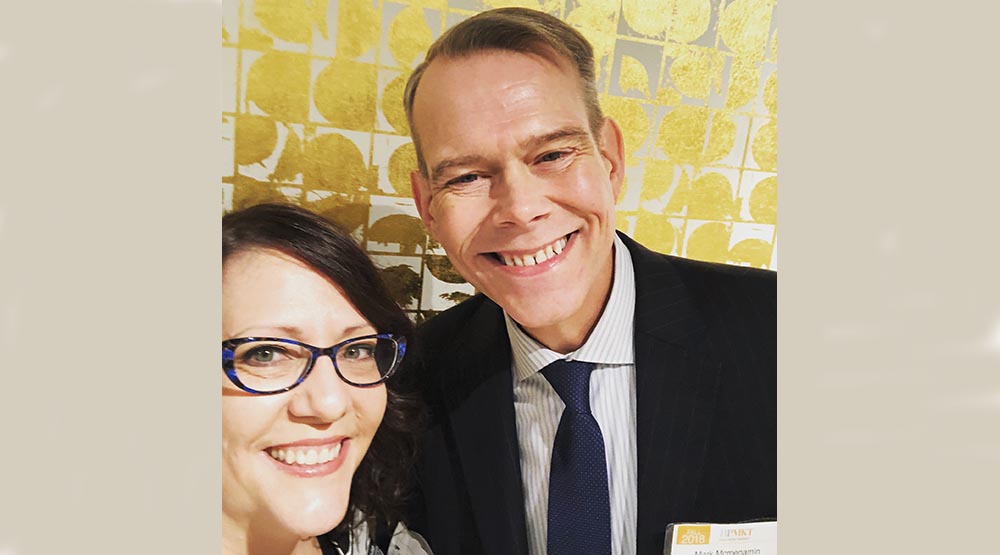 Mark McMenamin and Cheminne Taylor-Smith were colleagues and close friends.

Mark McMenamin, a creative and extremely talented business journalist who was one of the original editorial staffers of Home Accents Today, passed away on Aug. 24 after a brief illness. He was 62.

McMenamin’s experience as a furniture retail buyer, his keen observation of the home furnishings world and his unflagging dedication to covering a market from beginning to end made him a well-respected figure in the business he chronicled for more than three decades. And his skill as a writer earned him the admiration of his journalist peers.

“Mark worked every High Point Market for 30 years, covering millions and millions of square feet. He was unflagging, thorough and fair as a writer and columnist,” said Cheminne Taylor-Smith, the former editor-in-chief of InFurniture magazine who is now a consultant and strategist for the home industry. “He was also one of the most talented writers in the home arena. His on-point, intelligent and witty way of writing about our industry elevated the conversations we had about design and products.”

“Mark was the hardest working guy at a market you’ve ever seen,” agreed Warren Shoulberg, who while editor-in-chief of HFN launched InFurniture magazine in the early 2000s and hired McMenamin to head up its design coverage. “He hated to sit down in showrooms, he always kept moving. No one would work a cocktail circuit like him and still be standing.”

Taylor-Smith recalled one Atlanta Gift & Home Furnishings Market many years ago that introduced a new exhibitor, Heather McCartney. Her father, Paul McCartney, surprised her by showing up to help promote her new line of home accents. “There were so many press outlets there like Entertainment Tonight and People magazine. It was a crush,” Taylor-Smith said. “But then Paul McCartney tells everyone that he really wants to support Heather’s business, so he asks all the consumer press to leave. Once they cleared out, it was just the Home Accents Today staff standing there. But Mark in his New York way was far too cool to be excited. And in the photos we got with Paul and Heather, he’s the only one looking off into the distance like this happened to him every day.”

McMenamin was born Feb. 2, 1962, in Darby, Penn., the youngest of four children of John T. and Elizabeth (Betty) McMenamin. He graduated from Greensburg Central Catholic High School in 1980 and earned a degree in journalism from Temple University in Philadelphia, according to an obituary written by McMenamin’s brother, John McMenamin. After graduating, he worked as manager of the furniture department at Horne’s Department store in Monroeville, Penn., then held that same position at Strawbridge and Clothier in Philadelphia.

“One Sunday, while combing the classified section of the Sunday Philadelphia Inquirer, he saw a want ad that would change his life: a publisher was seeking a writer with a journalism degree and a background in retail furniture sales,” John McMenamin wrote. Mark moved to North Carolina and began his professional career in writing and editing for furniture trade publications. He started at Furniture Today, which at the time covered the home accessories business on a single page. That later spun off in into what was then called Home Accessories Today. McMenamin stayed with the publication, which was later renamed Home Accents Today, to cover the accent business.

It was in North Carolina that McMenamin met his future husband, Wesley Hendrix. The two were together for 31 years. In 1997, McMenamin and Hendrix moved to New York City, where McMenamin spent the rest of his life. He continued to work for Home Accents Today from New York, until Shoulberg approached him sometime around 2001 with the offer to join InFurniture, a monthly publication that also produced pre-show issues and market dailies. Smith served as editor-in-chief.

“It had a real attitude and a real voice,” said Shoulberg. “Mark did brilliant things on it. I always said he was of the two best writers I ever worked with.”

He was one of the first to write about knockoffs in the industry, according to Smith. He researched the topic thoroughly and convinced a lot of people —including some of the knock-off artists themselves — to speak with him.

“His copy was always meticulous,” Taylor-Smith said. “If you ever found a typo it was a very, very rare occurrence. And he was always careful to do his research and to cover all sides of a topic or controversy.

“Mark was also one of the fastest writers I knew. He never missed a deadline. He would get his mug of tea, sit down at his desk and literally spin fabulous copy out of nothing. What a talent.”

After InFurniture shut down in 2006, McMenamin moved to Interior Design magazine as market editor. He most recently worked for Sandow Media Group as native content editor for Interior Design and Metropolis.

McMenamin loved New York, according to his brother. “He loved musical theater, and loved to laugh and make people laugh with his quick wit and decidedly dark sense of humor,” John McMenamin wrote. “He enjoyed spoiling his mother during her lifetime and took delight in entertaining his nieces and nephews. He was a gifted and enthusiastic singer whose musical tastes ran from Sondheim to the Sex Pistols.”

McMenamin was preceded in death by his parents. He is survived by his husband, Wesley Hendrix; two sisters, Terry Valentine of Marshall, Va., and Elizabeth Naggy (Charles) of Calumet, Penn.; a brother, John McMenamin (Meg) of Tabernacle, N.J.; as well as nieces and nephews; and several great-nieces and nephews. In keeping with Mark’s wishes, there will be no service.

“I was also truly lucky and honored to be his friend,” Taylor-Smith said. “We used to double date with our husbands at the holiday parties and meet up for John Waters marathons at their house. Mark was a caring, honest and witty friend, and I’ll miss him so much.

“High Point Market just won’t be the same without him.”