Hanamint’s new Cascade Deep Seating collection is ultra-modern and features low-back seating. The design was a departure for the company, which typically specializes in more ornate looks.

CHICAGO — Outdoor furniture suppliers were largely optimistic at the Casual Market Chicago last week in Chicago, seemingly untroubled by the inflation plaguing many parts of the economy.

“It’s been a great market for us so far, and we expect it to continue the rest of the week,” Vice President of Telescope Casual Furniture Bill Vanderminden said mid-day Tuesday, the first day of the show. “We’re seeing maybe a bit of a slowdown in some areas in retail, but there is still pent-up demand.”

Telescope’s showroom was abuzz with traffic. The company unveiled the 1960s-inspired Welles collection for the show, which includes a three-seat sofa, armchair, oval coffee table and round end table.

Vanderminden says company’s backlog remains extensive. “We have a big backlog, but retailers want to be in a good position and are still ordering. It still feels like we’re playing catchup. We’ll probably feel like this for at least another year.”

He said supply issues still exist, but aren’t as bad for Telescope as they are for others.

“We make everything in upstate New York and are largely self-sufficient,” Vanderminden said. “Making in the U.S. gives us a big advantage as we have price stability. Product from Asia is unpredictable.”

Luxury outdoor resource Hanamint said while business is slightly down, it’s more of a return to normalcy.

“The past two years were unusually good,” said Russel Sorenson, company president. “But it’s nothing dramatic. We’re just getting back to a normal cycle.”

Design-wise, Sorenson said he sees customers moving toward simpler and cleaner designs and away from more ornate looks.

He said Hanamint will continue to create ornate product, as it continues to sell well, but it will venture into simpler product. The company showed off five new collections for the show, encompassing both looks. Crafted from teak, the Hacienda sunbed from Mamagreen comes in a variety of configurations.

High-end brand Mamagreen was also optimistic, although less so than others.

“I think business will continue to well in the U.S. but not in Europe,” said CEO Vincent Cantaert. “The war and inflation are hurting Europe more.”

Mamagreen unveiled five new collections spanning both residential and contract for the show. It also added items to existing lines and broadened its material options.

Cantaert said supply issues are getting better, particularly with material vendors. He also believes high-end and luxury brands like Mamagreen won’t be as affected as inflation worsens.

Mid-to-high-end brand and teak specialist Three Birds Casual was perhaps the most positive. As of Tuesday afternoon, the first day of the show, company president Tad Varga said the company had already written several orders.

“Demand is still on fire,” he said. “Inventory is in for lots of product. The only problem is the ports.”

Three Birds didn’t release anything new for the show but says new product is on the way, with new counter-height seating slated to be shown at the next market. The company sources its furniture from a factory in Indonesia. All its items are made from teak wood.

“Demand is still high, but we have noticed a drop in maybe the past four to six weeks,” said Leisa Rogers McCollister, vice president of marketing. “Seasonality is coming back. The drop is normal.”

The company introduced a new porcelain tile table to its Avana collection for the show. McCollister said lead times are long and the backlog is big.

“We moved from California to Texas during the pandemic,” said McCollister. “It was hard to get staff and get up-and-running. But now, we make everything out of our 400,000-square-foot facility in Comfort, Texas.”

Domestic supplier Woodard echoed much of the same. The company had several market introductions, including an extension table that goes from seating four to seating six and the “bulky, yet light” Latitude table.

“Demand is still strong,” said Senior Vice President of Sales Perry Solomon. “We’re not seeing a slowdown yet. Supply is challenging but getting better. Most issues are at ports.” 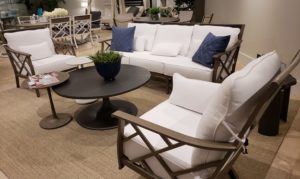 Castelle unveiled its Korda collection, which features dining and deep seating made of cast and aluminum. It’s hand-painted to look like wood.

Finally, luxury brand Castelle unveiled its new Korda collection, which is made from a combination of cast and aluminum hand painted to resemble wood.