Forest Tales was curated by Studio Swine – a collective established in 2011 by the husband-and-wife team of Japanese architect Azusa Murakami and British artist Alexander Groves who have recently relocated to Tokyo from London following the birth of their child (all three pictured below). The exhibition at Milan’s Triennale showcased 22 pieces from 14 countries and four of the American Hardwood Export Council’s (AHEC) recent projects across two years – all with the aim of drawing attention to underutilized American hardwoods such as maple, cherry, and red oak. “It was crucial to do something bold and impactful which can do justice to the extraordinary works by all the established and emerging designers, whilst at the same time creating no waste,” said Studio Swine. They created no waste by using the packing crates that the pieces arrived in as the plinths on which they were displayed, projecting a forest-inspired design by London-based graphic studio SPIN onto them once in-situ, which was then painted over, in such as way that ensured the packing crates could still be used for the return journey. The whole image only came together from one specific viewpoint in the exhibition hall – following the notion of  anamorphic perspective. “Thought Bubble was designed to create a space for mindfulness and relaxation through the repetitive rocking motion of the chair,” said Bangkok-based interior and product designer Nong Chotipatoomwan of the piece above. “American red oak brings a warm and rich texture.” Maple, cherry, and red oak are all versatile woods that grow at a faster rate than they are harvested. Chosen because they are strong, practical, tactile, beautiful, and rapidly renewable, they are currently significantly underutilized by the furniture industry – something AHEC wants to change. 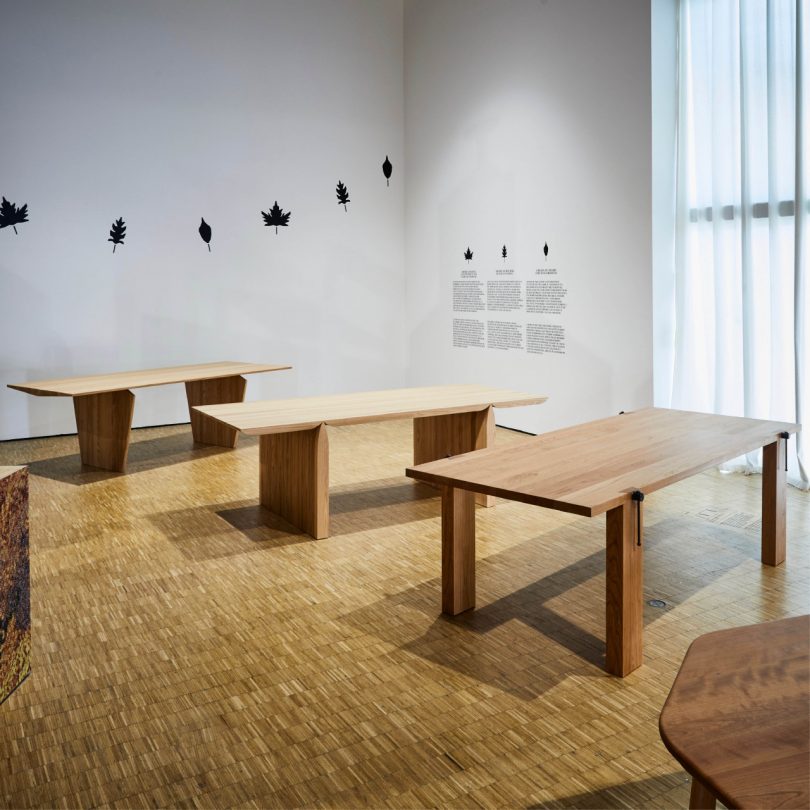 Three tables made by Milanese furniture-maker Riva 1920 – in the background Navalia by Rome-based architect Matteo Benedetti is made from “via di levare”: blocks of American red oak, carved and refined until the final shape is achieved. In the middle, Libra by Italian architect Federico Degioanni’s Oaka Table was subtly inspired by the shape of a dragonfly and is made from American red oak. And in the foreground, Morso by Alessandro Gazzardi is designed to be built by the user without tools – inspired by traditional carpentry, echoing the style of a carpenter’s workbench. 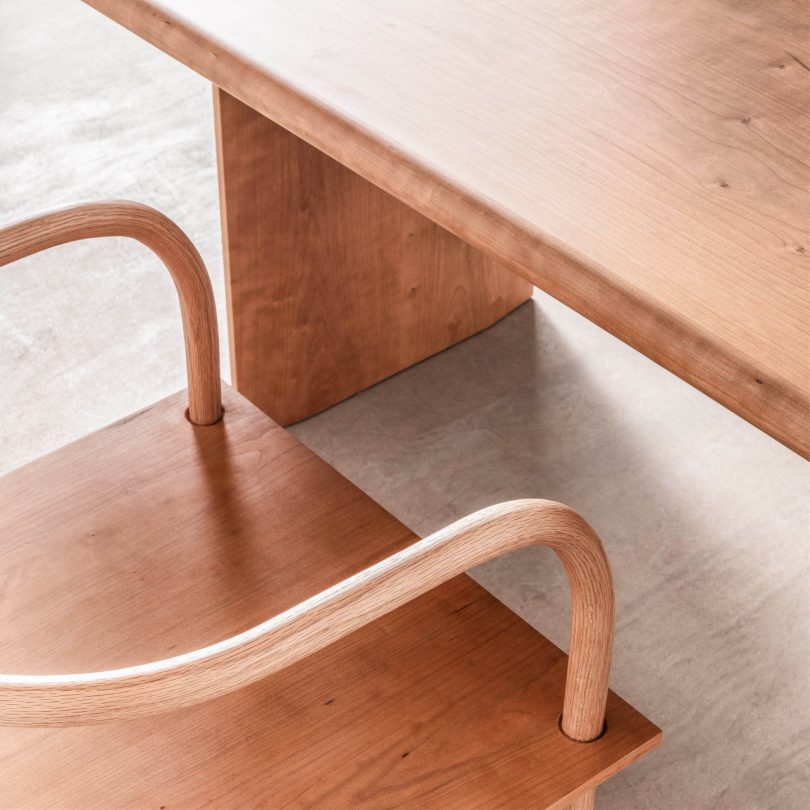 Studio Swine’s own Humble Administrator’s Chair and Table were also included in the exhibition. Drawing inspiration from the archetype of the traditional Ming chair and Chinese Gardens, the chair legs are made from steam-bent American red oak and the seat and table from cherry by UK-based Benchmark Furniture. Stem by London-based design and architectural practice Heatherwick Studio is described as “a table that celebrates the power of biophilia by incorporating planting into curved CNC-machined American maple legs, clamped to a glass tabletop.” 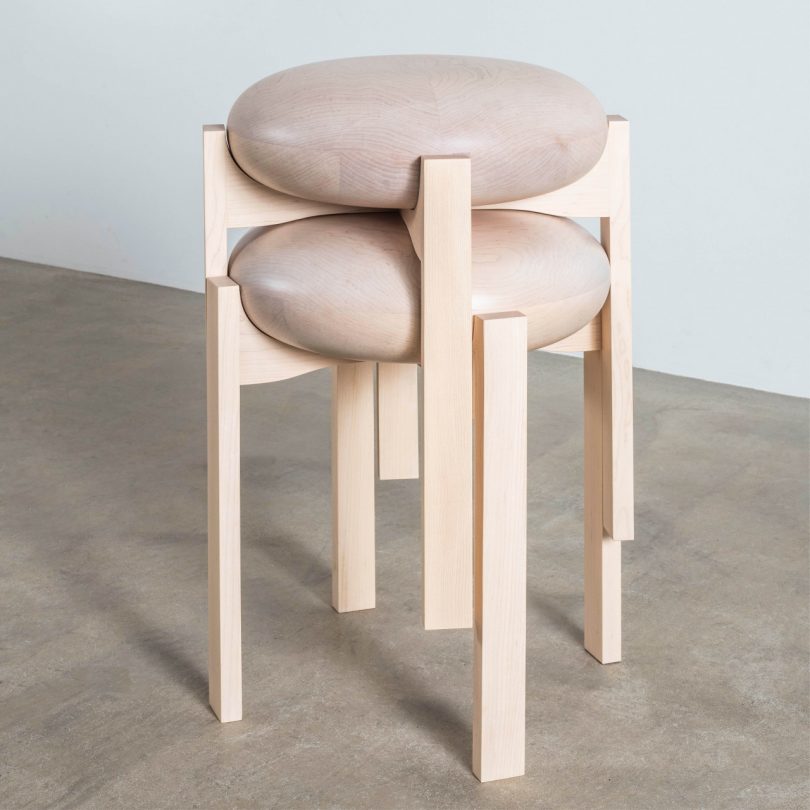 Danish designer Maria Bruun uses an intentionally pared-back design to let the material do the talking in Nordic Pioneer. This stackable stool with a rounded seat pad is machined from solid American maple by Benchmark Furniture to celebrate the timber. Concur is an American cherry lounge chair and book rest – “a companion object that encourages the sitter to tune out of daily life and focus on an analogue task in a warm and inviting space.” Is anyone else now obsessed by the idea of “companion objects?!” By the brilliant London-based artist Mac Collins. 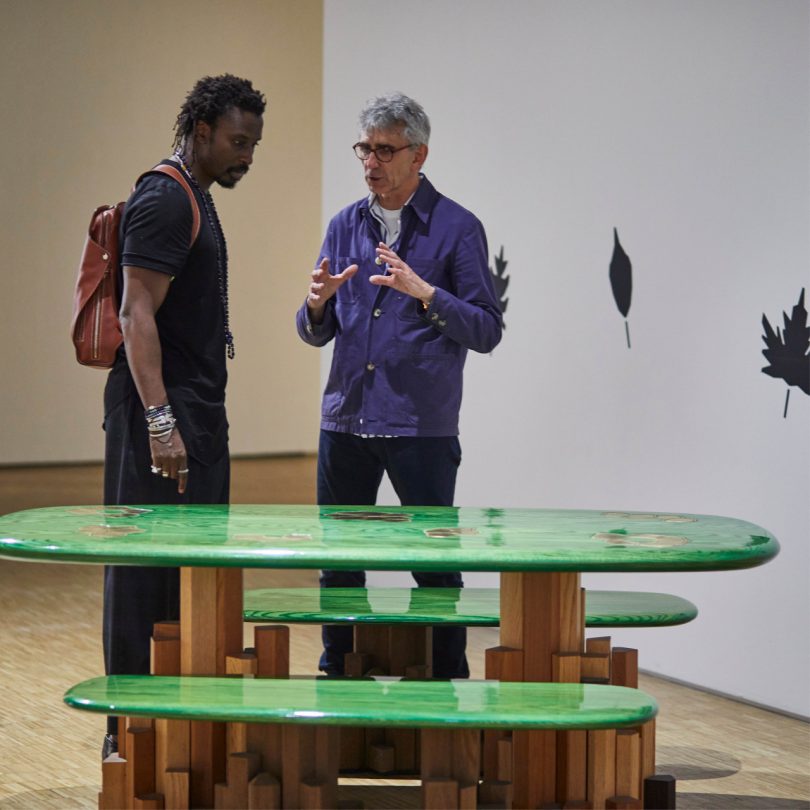 Finally, the Kadamba Gate outdoor seating by Lausanne-based designer Ini Archibong (seen above left) is made by Benchmark Furniture from American cherry, red oak, and thermally modified red oak. The underframe was inspired by the Giant’s Causeway in Northern Ireland, while the American red oak tops are finished with a rich green stain and gloss finish, and intricate removable brass detailing, which doubles as drainage in its outdoor environment. “Forest Tales brings together a celebration of exceptional design, a love for timber and a much-needed call for balance,” said Venables (above right). “Balance in the way we use natural materials with particular emphasis on renewable ones, such as wood. The same balance on which today’s designers, as well as the entire sector, are called upon to reflect in order to address the greatest social and economic issue of our time: climate change; and the need to put an end to the current throwaway culture.”

Katie Treggiden is a purpose-driven journalist, author and, podcaster championing a circular approach to design – because Planet Earth needs better stories. She is also the founder and director of Making Design Circular, a program and membership community for designer-makers who want to join the circular economy. With 20 years’ experience in the creative industries, she regularly contributes to publications such as The Guardian, Crafts Magazine and Monocle24 – as well as being Editor at Large for Design Milk. She is currently exploring the question ‘can craft save the world?’ through an emerging body of work that includes her fifth book, Wasted: When Trash Becomes Treasure (Ludion, 2020), and a podcast, Circular with Katie Treggiden.