The future of electrifying transportation isn’t just about the vehicles and underlying technologies within, but in large parts reliant upon whether the industry as a whole can successfully establish the infrastructure of charging stations to “refuel” those millions of batteries powering EVs. Today drivers roll into gas stations operating independently of the brand of automobile they’re driving. Tomorrow, this may not be the case. EV manufacturers such as Tesla are already supporting customers of their electric vehicles with their own fast charging stations; it was inevitable for other manufacturers to follow. Korean luxury automotive brand Genesis is taking a more stylish route for this purpose and goal through a collaboration with Los Angeles-based design and architecture firm Morphosis, imparting five Electric Vehicle Charging (EVC) sites throughout South Korea’s most populated metropolitan zones with an aesthetic intended to complement the luxe electric vehicles themselves. 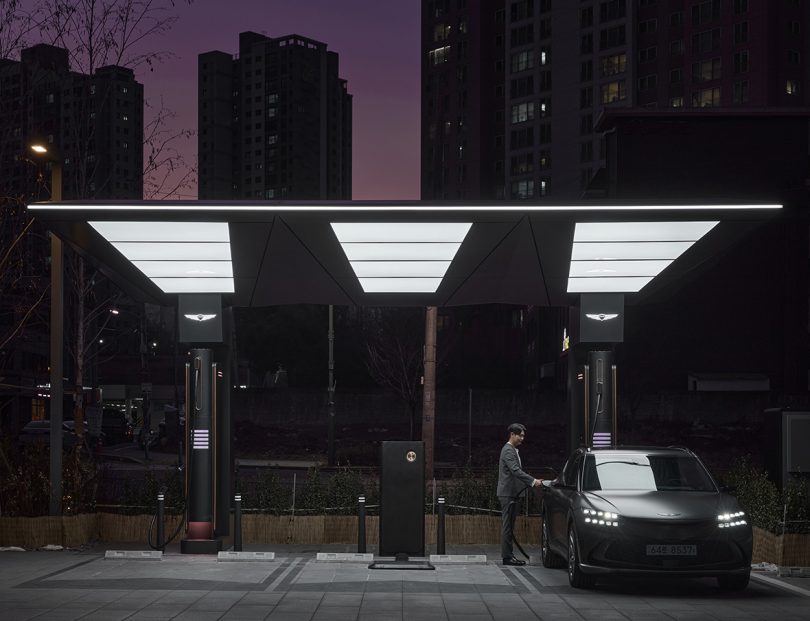 From design concept to the smallest crafted detail, the defining design identity of the Genesis brand are materialized in the charging stations: the wing emblem, the two lines and the Athletic Elegance. As leaders in both design and mobility, we are inspired to imagine new ways of thinking about the infrastructure needed for charging electric vehicles while providing Genesis new opportunities to connect and support its customers as we enter into the era of full vehicular electrification. 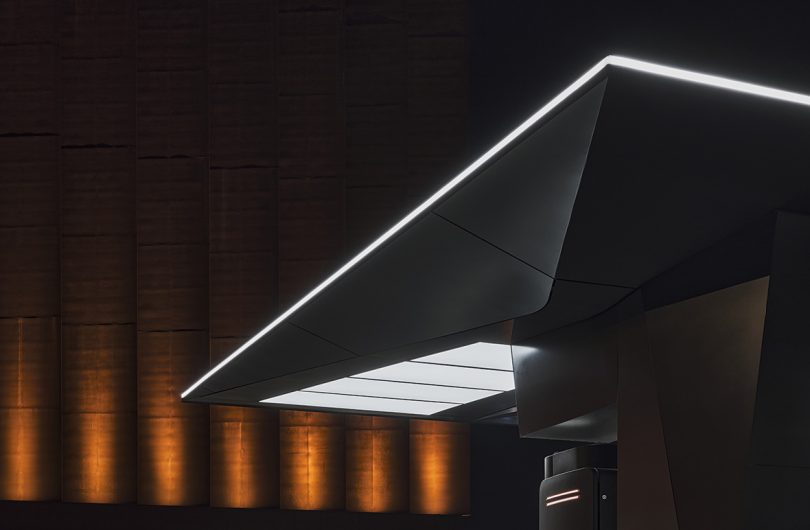 The EVC Stations are characterized by their razor-sharp angularity in winged canopy form. Constructed of aluminum panels on a steel superstructure, the exterior is intended to offer drives as instantly recognizable of a station to roll into as any current gas station. The architecture also provides a safe and protective overhang with an integrated LED light feature capable of changing colors as the status of charging levels change. 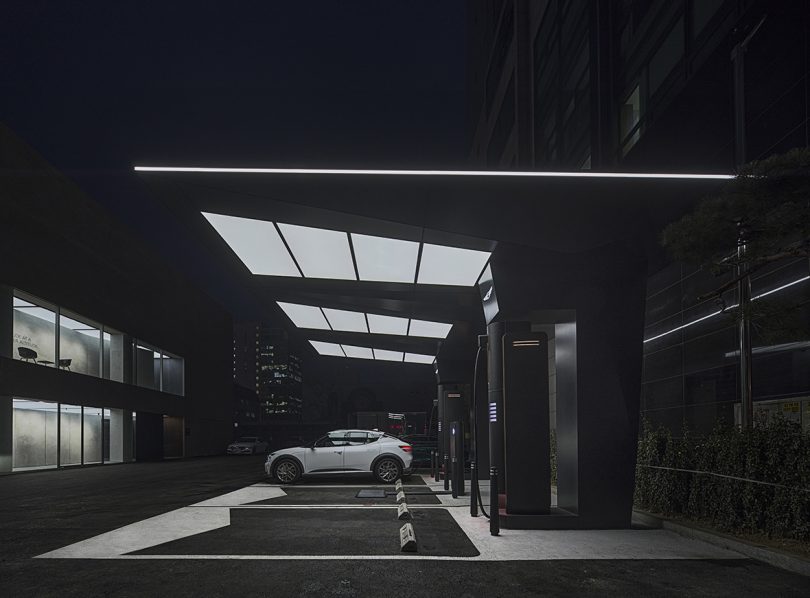 The canopies can also be situated in “double” and “triple” charger layouts, allowing multiple vehicles to be charged at once. The new EVC stations are compatible with Genesis’ electric vehicles and the ultra-fast chargers can fully charge these vehicles in as little as 20 minutes. 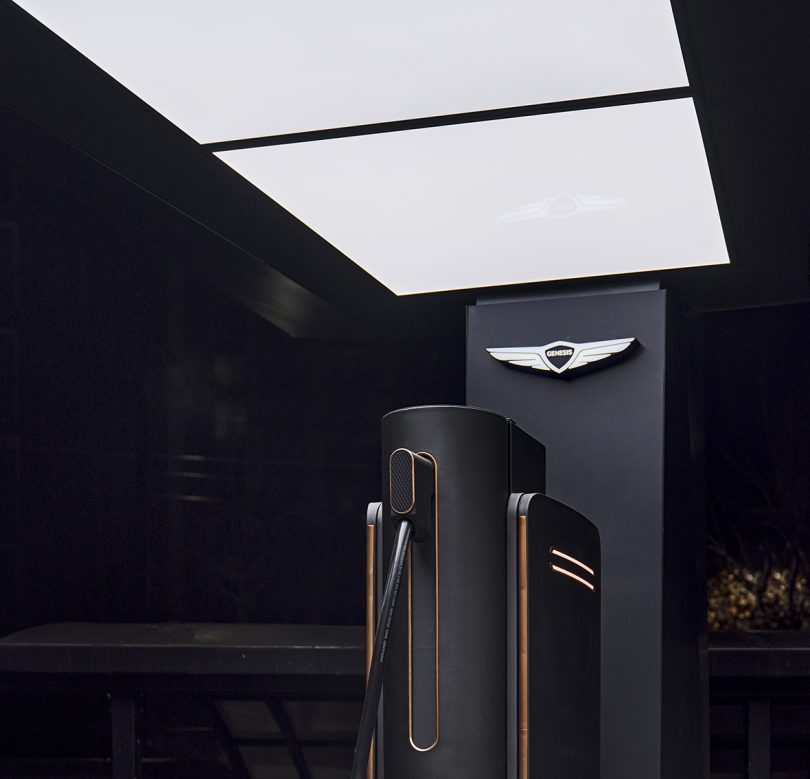 Genesis says the canopies are designed to be modularized and replicated in future expansions within Korea and beyond. 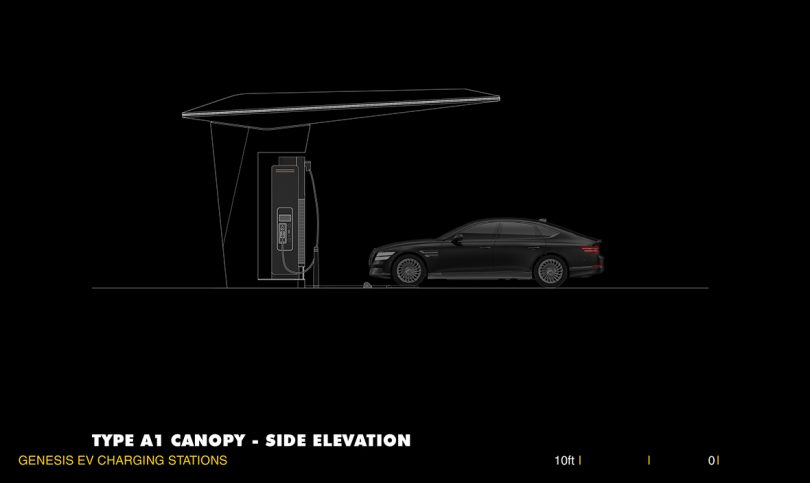 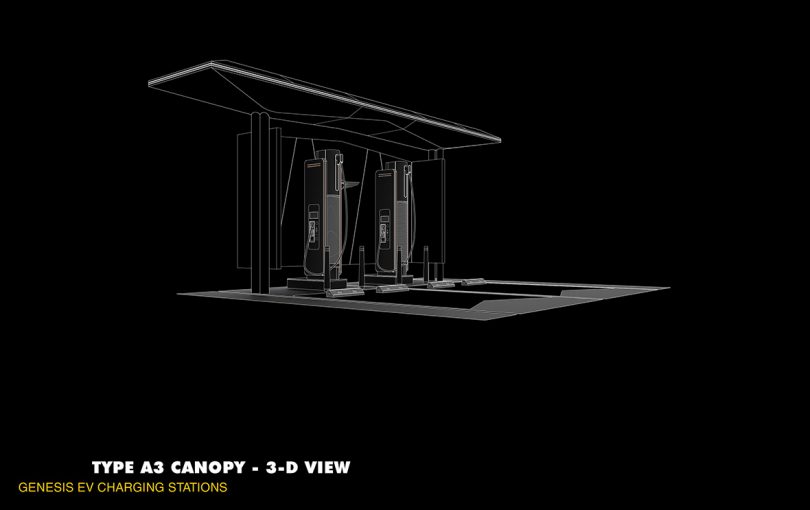 If you’re in Korea, you’ll be able to check out Genesis’s first phase of their Electric Vehicle Charging plans in Gyeonggi-do before other charging sites strewn throughout South Korea’s most populated metropolitan zones are replicated across Seoul and Gyeonggi-do, including stations in Genesis’ flagship showrooms, Suji and Gangnam, as well as other locations in Seoul and Goyang.