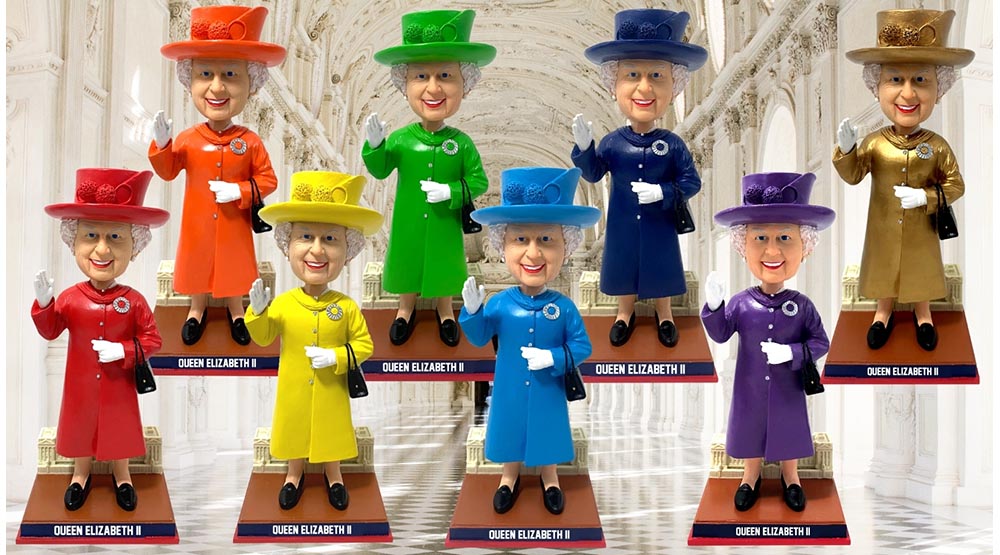 The National Bobblehead Hall of Fame and Museum has unveiled a series of limited-edition bobbleheads of Queen Elizabeth II.

Queen Elizabeth II became the first monarch in British history to achieve 70 years of service. The Queen acceded to the throne on February 6, 1952, after the death of her father, King George VI. To celebrate the unprecedented anniversary, a four-day national holiday weekend from Thursday, June 2 until Sunday, June 5, known as the Platinum Jubilee Weekend, is being held. The Washington Post captured the celebration in this photo gallery.

The smiling and waving Queen Elizabeth bobbleheads are dressed in a long coat with a round hat. There is a diamond brooch pinned to her chest. Wearing white gloves, she is holding a black leather bag in the crook of her arm. She is standing in front of a replica of Buckingham Palace and the front of the base says Queen Elizabeth II. The bobblehead is available in eight bright colors: red, orange, yellow, green, light blue, royal blue, purple and gold.

The bobbleheads are individually numbered to 2,021 and were produced by the National Bobblehead Hall of Fame and Museum.

Editor-in-Chief Allison Zisko first joined HFN in 1998 and spent many years covering the tabletop category before widening her scope to all home furnishings. In her current role, she oversees all aspects of HFN, including its print and digital products, and represents the brand at home and abroad through presentations, panel discussions and HFN’s podcast, The Inside Scoop.