The New Apple Watch Ultra Is Big by Design

A watch has never really existed solely as a time keeping accessory. Wristwatches have featured calculators, micro televisions, operated as mobile gaming devices, guided adventurers with tacked on compasses and other way-finding markers, and have been combined with a multitude of other features miniaturized for the wrist. Even sans these accoutrements, the watch in itself has always operated as a statement of lifestyle, conveying as much about the wearer’s aspirations as its actual daily functions.

Smartwatches have always needed to deliver a more convincing reason for its anachronistic existence than their pre-digital counterparts. In the age of the smartphone, the watch became a dumb redundancy. Then in 2015, the Apple Watch arrived to stake claim to a still nascent wearable landscape. 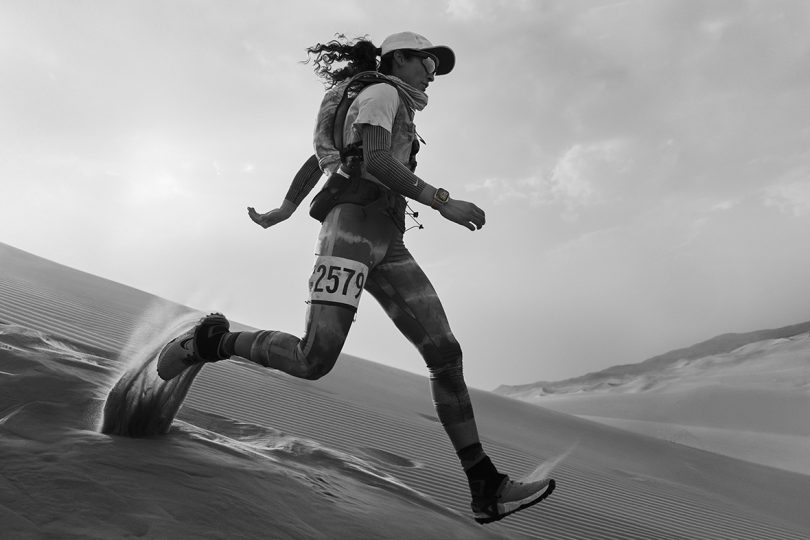 Apple envisions adventurers and competitive endurance athletes will most benefit from this new expression of the Apple Watch.

It was a time when the wearables category was a raging sea of promises touting innovation, but whose shores were littered with “coming soon” disappointment. This was partially due to the limitations of manufacturing and available technologies. But it was also that nobody – Apple included – had yet made a convincing case the smartwatch could match the functionalities already on our phones, let alone deliver a wholly unique experience deserving of our wrists. 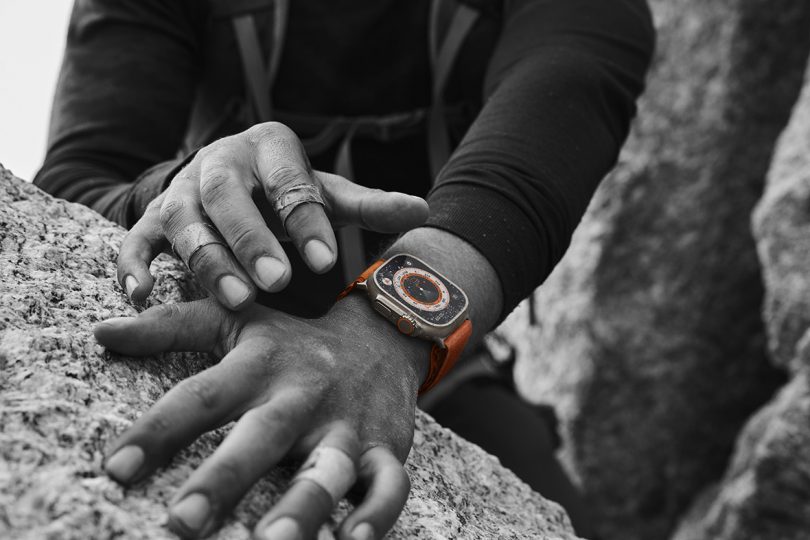 The Apple Watch has improved considerably since its launch. Now in its eighth generation, its ability to complement and extend the functions of the iPhone are bolstered increasingly by its own functional independence. It can even operate as a cellular device all on its own, like the eighth grader it is. Except for the absence of a TV viewing option, the promise of a Dick Tracy watch has come to fruition.

Equally important is Apple has fine tuned the original design every step of its way, diligently shaving millimeters here and grams there to make the Watch ever more comfortable while still adding features with every new model. Rather than perpetually reinvent their products, the company is not averse to sharpen the proverbial edge, keeping what works and abandoning what doesn’t. The iterative approach explains why the latest iPhone in any given year can seem initially underwhelming compared to the competition’s first to market innovations, but in actual daily use can prove to be hard to abandon because of the satisfying holistic experience.

Which makes the new $799 Apple Watch Ultra a bit of a chimera, being the culmination of fine tuning shaped by feedback from generations of Apple Watch users, but also detouring onto some untrodden ground where bigger is pronounced as better. The following is focused upon the fit and feel of the design, as the Ultra’s functionality requires testing beyond a few passing days of hiking, yard work, and trips to the local supermarket to ascertain.

I hate encumbering myself with adornments, watches or otherwise. But today I wear an Apple Watch daily to track my workouts, nudge me toward healthier habits, and keep me aware of appointments and directions. The 7th generation Apple Watch is almost comfortable to completely forget, whether while hammering behind a keyboard or taking an early morning hike or run. I don’t doubt the eighth iteration delivers an ever so improved experience.

On the other hand the Ultra presents itself in almost audacious fashion. It’s big and different, and at first looks unwieldy on the arm. The lower rounded section of its aerospace grade titanium case resembles a standard Apple Watch, with a micro-abrasive blasted finish resulting in a finely textured surface measured by microns reputedly for durability. Viewed from the side, the case’s curved base tapers inward and upward into a perfectly flat display, forming a flattened soup bowl silhouette that becomes even more evident while worn.

When asked about this tapering, Apple would explain those few millimeters around the screen are there to reduce the chances of marring the 1185-square-millimeter display from the side. It seems a rational explanation, although it’s hard to shake off the desire to see the case continue along a more flattened path when remembering the flat slab design language dictating the iPhone.

The sum of these case sections project a shape somewhere between brawny and a bit plump (the dad bod of watches). Apple claims the Ultra’s battery life now can stretch into 36 hours with normal use with the promise of a 60 hour battery life in power saving mode by dialing down the GPS and heart-rate readings that arrives TBD via software update. The Ultra looks large at first, but like buying a 65″ television, acclimation to its size is quick because of its lightweight titanium casing.

Surprisingly, the Ultra’s dimensions do not equal a heavy feeling watch, resulting in a disconnect between what the eyes see and the wrist feels. In fact, the Ultra is a very wearable, all-day affair because of the lightness of titanium compared to steel or even aluminum. Not once over the span of several days wearing it have I ever thought the Ultra hindered movement or comfort, except for the deflected side-eyed glances it earned while navigating a local crowded HMart.

The Ultra now sports a 410 x 502 pixel screen versus the Series’ 396 by 484 pixel density. The luminous screen can hold its own against bright sunlight, twice as bright as its Series counterpart, blasting 2000 nits of peak brightness (very evident in flashlight mode). No more shaded palm viewing required, even in Los Angeles’ late summer daylight. We’ll be curious to see how visibility fares in daylight brightened by snow when winter arrives. 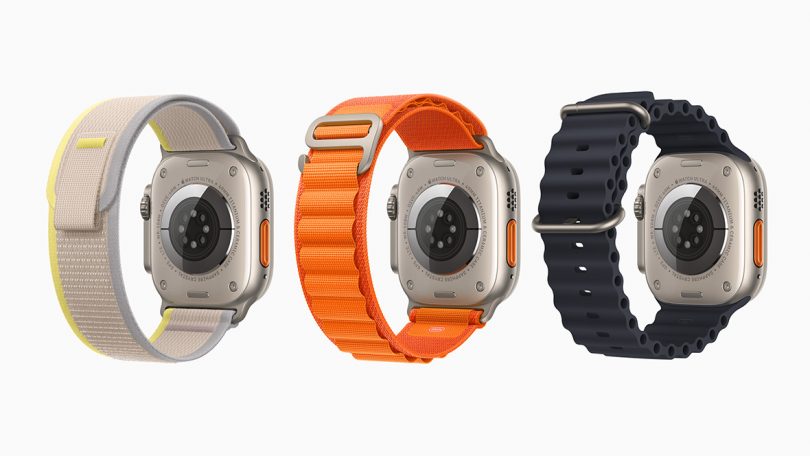 The three new bands designed for the Ultra are deserving of a design spotlight in themselves. We’ve worn two of the three – the latch secured Alpine Loop and totally tubular Ocean Band – but its the velcro secured Trail loop that will likely offer the most comfortable band to wear throughout the day, attributed to it being the thinnest and softest band Apple has ever designed. 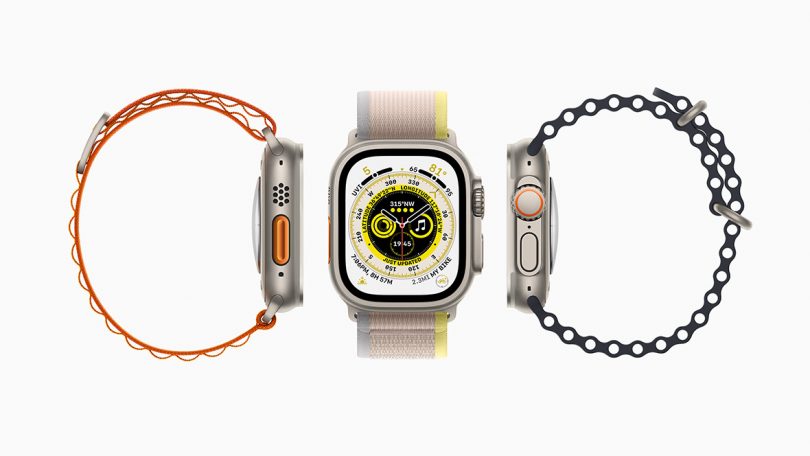 A closer inspection reveals a lighter band wrapping just below the Ultra’s display edge. That’s actually antennas molded directly into the surface of the case. Alongside adding a subtle design detail, the prominent location boosts the Ultra’s GPS performance, a feature emphasized in relation to the watchOS 9 redesigned Compass app with way-finding integration and a new backtrack navigation option aimed at outdoor enthusiasts. 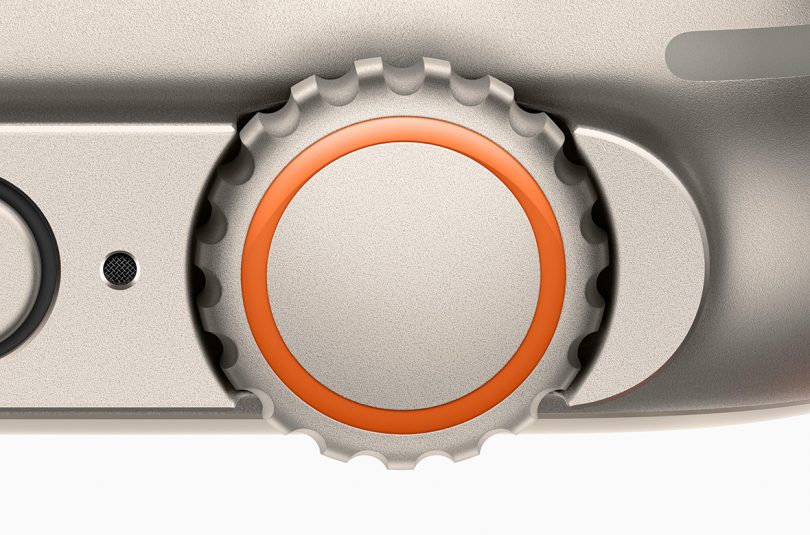 Continuing the Ultra’s large and in charge design, the crown and side button are much more prominent. The crown is almost 30% larger in diameter than the Series 8, and is shaped with prominent knurling to boost the Ultra’s tactile responsiveness while wearing gloves in inclement conditions. The number of knurls have been reduced down to 19 on Ultra’s crown compared to 45 on the Series crown; the feel across a bare thumb is almost sharp, catching the skin and much easier to engage than an already simple to use Series crown (we might need to moisturize our hands more too).

Similarly for the purposes of serving dutifully during extreme weather activities, the adjacent side button doesn’t sit flush with the right side protrusion. Instead it sticks out by just over 0.5mm ensuring a confident press instead of a fumbled attempt, allowing for engagement by touch and memory alone. 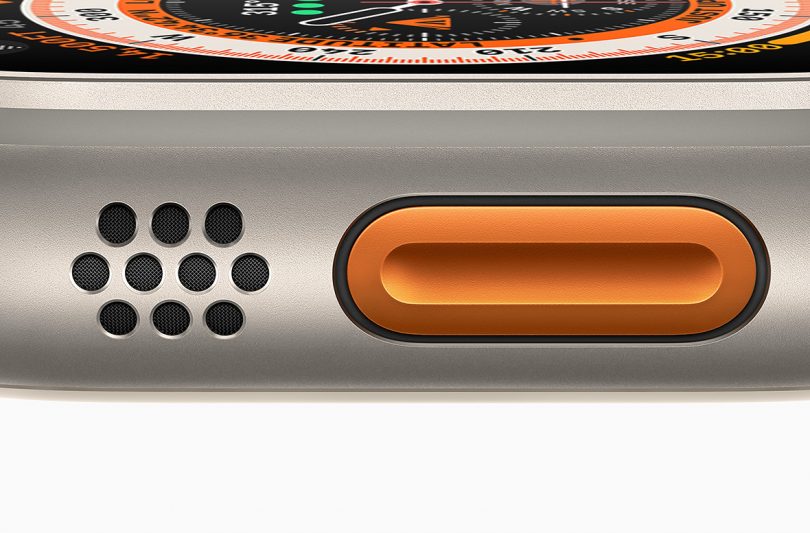 A third orange hued Action button sits on its left side to engage various options, include an emergency tone that shrieks with the volume and tone of an agitated bird. But for non-emergency use, the button can be programmed for less hazardous situations, like engaging the start of a workout or activating the screen as a flashlight. Beyond the button’s color, in some ways the action button’s shape and texture is the most evocative of traditional outdoors gear designed for lightweight durability. My fingers are perpetually drawn to trace its elongated center with a PEZ-like indentation.

Subtle gratification through materiality, curated functionality, and carefully executed UI experiences have always been the strongest argument for Apple’s ecosystem of devices. The Ultra sets out to bring those same combination of features and attention to design for the outdoor and extreme sports set. Like the aforementioned outdoor vehicles, it’s undeniably an aspirational device in spirit and execution. But something tells me for every optimally conditioned peak chaser or defiant daring diver, they’ll be legions of normal weekend trail runners, avid hikers, or even the daily dog walking wanderers who will be drawn to the allure of the Ultra’s brawny functionalities and the adventurous lifestyle it projects vividly in its design.

For more info on the Apple Watch Ultra, visit apple.com.