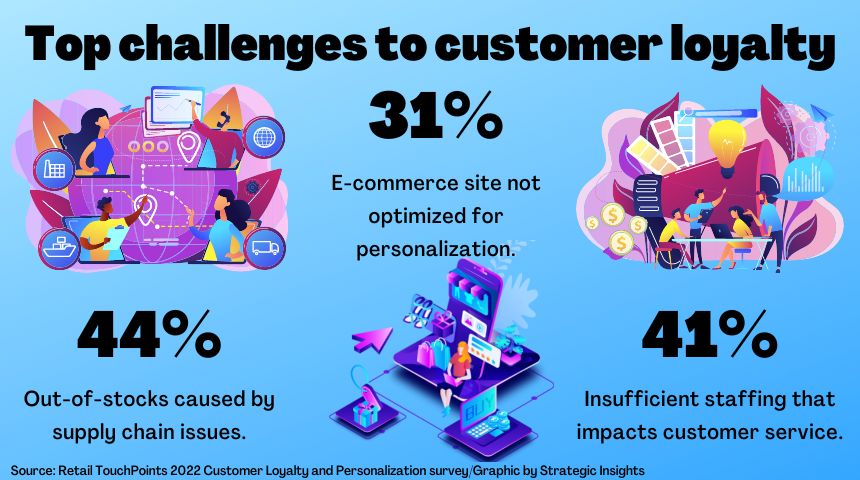 High Point, N.C. — Items in their control — and several that aren’t — are at the root of current customer loyalty issues for retailers, according to a recent benchmark report on the topic.

When asked about the most significant challenges related to loyalty, the 115 retailers surveyed for Retail TouchPoint’s 2022 Customer Loyalty and Personalization report most often pointed to losing customers because of out-of-stocks caused by supply chain issues (44%), followed closely by insufficient staff (41%), which is considered both a by-product of the pandemic and the onset of the Great Resignation.

Some other factors cited by retailers were related to more controllable issues, including their digital offerings, and ranged from optimization issues for e-commerce sites and mobile to high e-commerce volumes negatively impacting customer service.

Retailers also weighed in on the challenges to driving repeat purchases with the leading one being competition from lower-priced competitors (43%). Concerns about losing sales to marketplaces such as Amazon were top-of-mind for 30% of respondents, while various data and technology issues such as non-centralized customer data, insufficient or outdated technology and incorrect customer data for retargeting came up as well.

Despite the problems cited, the ability to turn new customers into repeat purchasers improved, as 13% of respondents said they were able to convert more than 50% this year vs. just 8% who did so in 2021. And the percentage of conversions at the low end decreased, with just 11% saying they turned less than 10% of newly acquired customers into second-time purchasers vs. 15% last year.

Looking at the means of engagement for acquiring new customers, email outreach was the leading vehicle, cited by 68%, followed by traditional media at 51%. As for newer channels, both paid social and text messages were listed by about one-third (31%) of respondents, with slightly more (37%) opting for paid online searches.